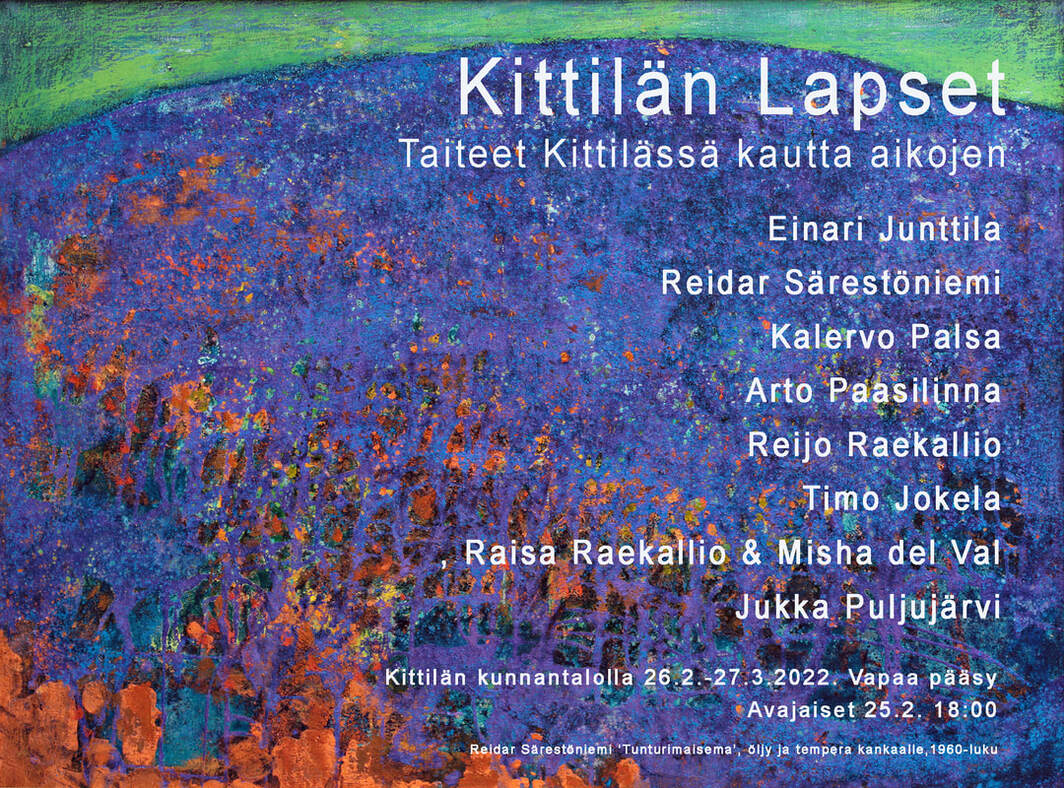 'Kittilän lapset' is a survey exhibition that presents works from the most renowned and esteemed artists of Kittilä, Lapland, Finland of the last 75 years.

'Kittilän lapset' is a once-in-a-lifetime opportunity to see together under the same roof works from the most committed Kittilä artists since World War II. The project considers a dialogue between artists of different generations and fields who have been born or have lived in Kittilä for a significant amount of time.

The project is curated by Kittilä-based artist/curator Misha del Val and produced by Taideseura Staalo Board, in collaboration with the Department of Culture of Kittilä Municipality.

Reidar Särestöniemi (Kittilä 1925, Kittilä – 1981) is one of the best known Finnish artists and was the most remarkable Lappish artist of his time. He was born as the seventh and youngest child in the family of Alma and Matti Kaukonen in Kaukonen village, Kittilä. Later the family changed their name to Särestöniemi. Reidar Särestöniemi studied at the Academy of Fine Arts in Helsinki (1947-1952), and at the Ilya Repin Institute in Leningrad (1956-1959). His career got off to a start in 1959 when he held his first solo exhibition in Helsinki after returning from Leningrad. He was awarded an honorary professorship as an appreciation of his life's work. Except for the time he was studying arts, Reidar Särestöniemi lived his whole life in Särestö. Reidar Särestöniemi was a colourful character who in his time attracted plenty of discussion about his art and his personality.

Huugo Kalervo Palsa, known as Kalle (Kittilä, 1947 – 1987), was a Finnish artist whose style has been described as fantastic realism. Although his work did not draw significant attention in his lifetime, Kalervo Palsa has experienced a more recent revival since the publication of critical works, a biography and two major retrospectives in Helsinki and Pori.

Einari Junttila (Kittilä, 1901- 1975) was an internationally known and recognized self-taught lyrical realist, known particularly as a watercolor painter. Junttila is the earliest known artist from Kittilä, a sensitive interpreter of Lapland's nature faithful to his vocation. Junttila was “discovered” by Günther Thaer, a German art expert on a tourist trip, in the early 1930s. Einari Junttila participated in the World Exhibition of Finnish National Art, which toured Germany in 1934.

Reijo Raekallio (b. 1950, Kittilä) is a Finnish painter. For 50 years Reijo Raekallio has been painting pictures of everyday life portraying people, reindeer and nature. He was the 10th of the 11 children by Urho Raekallio and Aili Tervo. He was a member of Lapland Arts Council for three years, and the president for another three. Raekallio taught at the Lapland School of Art in Tornio in 1978-1981, and then became a freelance artist. He returned in 1981 to his birth village of Pöntsö in Kittilä, where he founded his own gallery in 1987. Raekallio's works have been exhibited in more than 150 exhibitions in Finland and in 12 exhibitions abroad. He has been awarded the Ars Arctica Prize in 1985 and the Kittilä Municipality Art Prize in 1987.

Timo Jokela (b. 1956, Kittilä) is Professor of Art Education and former Dean of the Faculty of Art and Design (2009-2017), University of Lapland. Currently, he is the leader of the Thematic Network on Arctic Sustainable Arts and Design, University of Arctic. He also worked as Visiting Professor of Art Education and Environmental Art at the University of Strathclyde, Glasgow, Scotland (2006-2011). Jokela works actively as an environmental artist and community artist, often using natural materials, such as snow, ice and wood, and the local cultural heritage of the North and the Arctic as a starting point for his works. He has produced a number of exhibitions, environmental art and community art projects in Finland and abroad.

Jukka Puljujärvi is a Kittilä-born, Helsinki-based fashion designer, who has gained a reputation in the domestic fashion market as well as internationally. In 2017, Puljujärvi alongside Marta Valtovirta launched their own design label, Hálo. The collection includes designs based on Reidar Särestöniemi's works, which Puljujärvi became familiar with as a young student in Kittilä.